Here’s where I give away one of my guilty pleasures.  I am a “Game of Thrones” fan (adapted from the book “A Song of Fire and Ice” by George R.R. Martin).  I’ve read all the books and watched the series on HBO.  I don’t usually do this kind of thing, but I’ve decided to make a few of the main characters.  Well, three of the characters that I think are the main ones, the three little dragons that were born with Dani in the big bonfire at the end of season.    One will be completely hatched, one partially hatched, and one still in the egg.   I will need three eggs for this project.  I’ll start with those.

Those of you who know me know that I hate the using balloons for paper mache.   It is too reminiscent of the tired, antiquated use of this wonderful medium.   But…and here is my big but…balloons are great for one thing…yes, EGGS.    I want to make three dragon eggs, so I bought a few balloons.   (They have to be green.)   Making them the same size is a bit tricky. 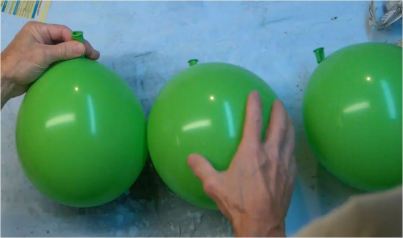 I added the paper mache and let them dry.   It turns out that these balloons didn’t quite give me the shape I wanted.  They weren’t quite dragon eggs. 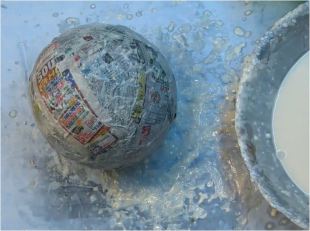 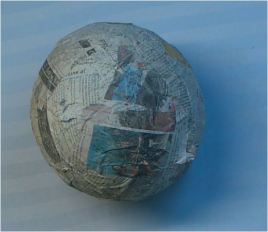 So I sliced them down the middle and pushed on side under the other.

Then I added paper to fill in the gaps.  Of course I’m obsessive with my masking tape and paper.    I kept adding paper here and there until I got the egg the exact shape I wanted.

I made three of these.  Again, getting them to be the same size and shape was much more challenging than I expected.

Dani’s (or Danny’s) Paper Mache Dragon Babies: More Eggs and Little Jaws
Dani’s dragon eggs had scales.  That’s right down my alley.   I started on the bottom and worked my way to the top.   I will cut a couple of these eggs open.    Since I will hollow them out, I want the shell to be strong.   Adding scales like this is perfect for strength.   When you fold the cloth for the scales you get about three layers of cloth and glue.

On to one of the babies.   Everything springs from the jaws.  I cut open a small paper mache ball and pulled out the wadded paper.    I used the shell for the jaws.   I hot glued some little baby teeth inside the shell.

I added cloth mache to the jaws.  Then I made a little tongue and added cloth.  Then I painted.  It’s always easier to paint the jaws before assembling the head. 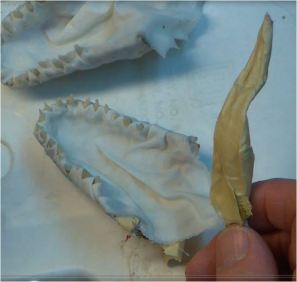 Dani’s (or Danny’s) Paper Mache Dragon Babies:  Wings, Some Assembly
First, a quick note about the bottom of the egg.  I just crumpled cloth for a rough effect.  I think it looks great (although it wouldn’t be too comfortable for a mother dragon to push that out)(of course having scales on the eggs would be no fun either).    As I mentioned earlier, I’m making two hatched dragons.   One will be standing, the other just emerging from his egg.  They are similar so I’ll bounce between one and the other.    On the right I’ve made one of the little bodies by taping together two small paper mache balls.  I attached a shell rolled up for the neck, then I added the upper and lower jaws.     Beside the body, you see the makings of a tail and legs.   No paper mache for those.   I just twisted newspaper around pieces of wire clothes hangers and wrapped with masking tape. 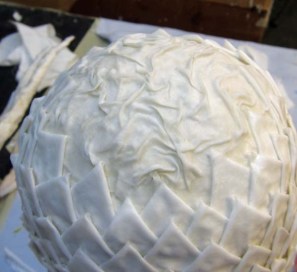 I used bird eyes.  They had to be small.   I like the way they turned out.   These teeth are probably too big.   But they will have to do.   They would just break if I tried to make them smaller.     Here is one of the little legs after I added some details.   Again, I just crumpled small pieces of paper and used masking tape to fashion calves and toes. 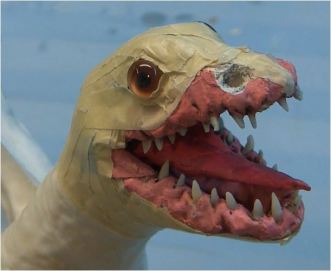 Here is the little guy with his legs on.  Looks a bit like a frog from the waist down.   I added the tail and checked to see how he would fit in his egg.

Time for wings.  I make the “fingers” the same way I make the legs by twisting paper around wire.  Then I tape them all together. 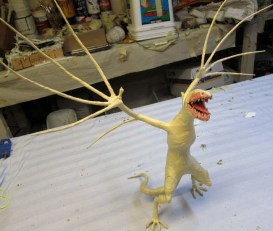 As always, I drape wet cloth over the fingers.   After the wings dry overnight, I trim them with scissors. 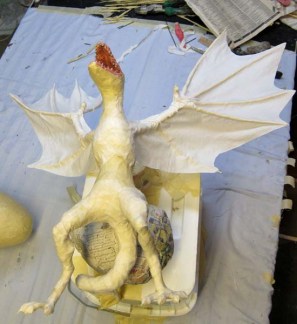 I draped the wings of the little guy in the egg before I put them on the body.  As you can see I rolled them up so that they look as though they are unfurling as he gets ready to leave his egg.

I added cloth mache to the faces.  Then I promptly changed my mind about the shape of the head.   I added a bridge between the forehead and the nose.   I wanted the face to be more round.   Such a change is kind of silly I suppose.   It’s just a matter of taste.

(PS.  For those of you who are watching the TV series, I hope you loved the scene where Drogon, as a young juvenile, took care of the slave owner.)(PSS.  Yes, I’m also making juvenile Drogon.  I want him.)(But mine won’t shoot fire.  Damn. )

Here are the two little dragons.  I guess I ended up melding the way they looked on the TV series and the way they are described in the books.    Drogon is basically black with red markings.    He looks a lot like the famous photo of him sitting on Dani’s shoulder right after the fire. 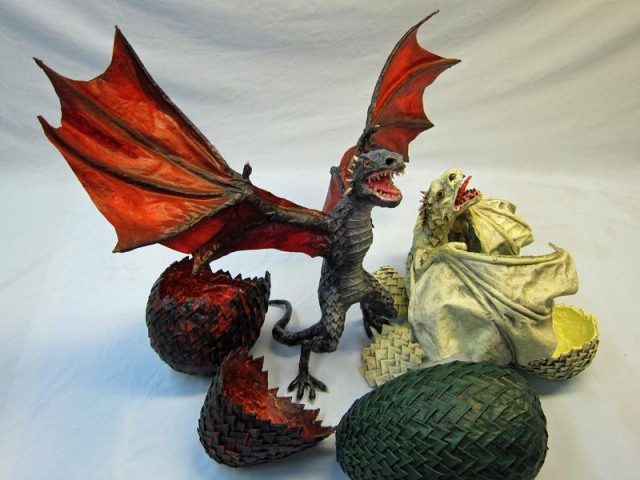 Viserion is cream colored with gold on the horns and spines and black teeth.   It was quite a challenge making the full dragon so that it would fit into the egg.    Here are a photos.  I think he is cute. 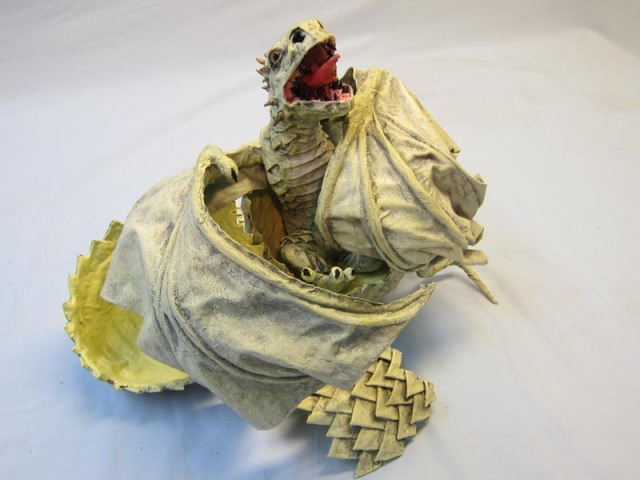 You will  just have to trust me that Rhaegal is still inside his green egg.    If you’d like to watch the time-lapse making of this project, you can find it here.
Remember to subscribe to my Youtube channel if  you like the videos.