Hey all.  Well, I’ve started a couple of projects.  I’m making one more dragon trophy, just because I bought some lights (pink this time) and need to use them.   I am also making a project for an organization based in Los Angeles called, “Kitty Bungalow: Charm School for Wayward Cats.”  This is a non-profit group that works with the many feral cats that live  in and around that giant city.  This will be for an auction they hold once a year to support their efforts.   I’ve decided to make a cat-like dragon, or a dragon-like cat.   I think it will fit the “feral” theme.   In this series of posts I’ll detail the making of the second project, but not the trophy.  Most of you have seen enough of those!

As has been the history with all my “helpers”, Mazzy has decided to help me with the initial crumpling of the paper.  (Yes, she is adorable. Hardly a kitten any more!)   First I crumpled paper into a “body sized” ball.

Next, I bent some clothes hangers for appendages.   I always make a figure “8” for the arms and legs.  Then I stuff them with wads of paper.   The top parts of the 8 are for thighs or upper arms.  The bottom parts are for calves and forearms. 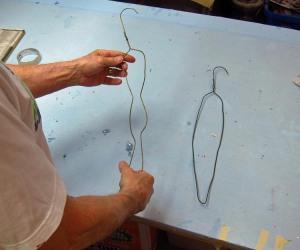 Ready to mache….in the photo below from left to right… I made two small front arms, then two legs, a neck, the main body, a few smaller balls for the head (along with extra balls to use for sculpting), two “arms” for the wings, and a long cat-like tail (in the middle underneath the other pieces).

To my surprise, I didn’t have any cheap, white flour in the house!  So I used Elmer’s glue for this step instead.   I prefer flour and water paste for several reasons.   The glue tends to shrink as it dries.   And it doesn’t shrink uniformly, so you end up with ridges and depressions that you have to fix later if you want a more symmetric or smooth surface.  Also, using the glue makes it much harder to cut the pieces when sculpting, and the pieces are much more brittle if you use glue.  So bending the pieces will often times cause them to break.   That doesn’t happen with flour and water paste.  But the glue will do in a pinch.   I added the newspaper strips to all the pieces. 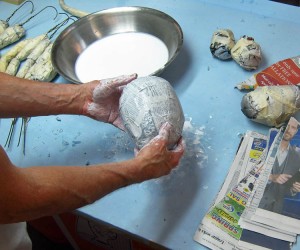 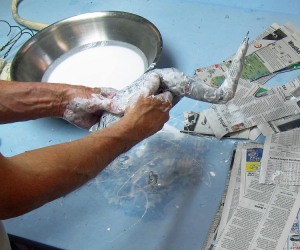 Here are all the parts after they dried a few days. 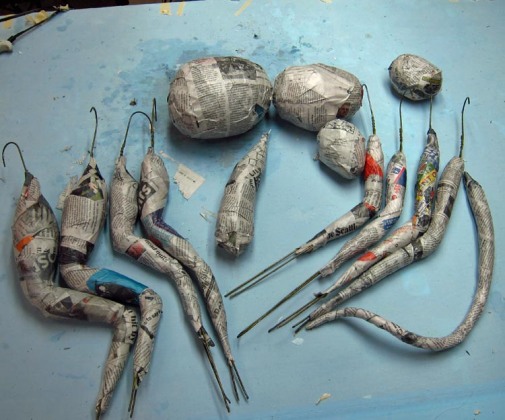 I’ll be back soon with a new installment.    Thank you for your patience.   I know I haven’t been very good about posting over the last year.

Hope you are all making art!